As a recent runner, entrepreneur, & having spent at @Nike HQ for ~2 years, “Shoe Dog” by Nike founder Phil Knight was inspiring. Here are my favorite quotes and notes from the book

“Beating the competition is relatively easy. Beating yourself is a never-ending commitment”

“You run and run, mile after mile, and you never quite know why. You tell yourself that you’re running toward some goal, chasing some rush, but really you run because the alternative, stopping, scares you to death.”

This is so true in running but also in life and business in general!

“So that morning in 1962 I told myself: Let everyone else call your idea crazy … just keep going. Don’t stop. Don’t even think about stopping until you get there, and don’t give much thought to where “there” is. Whatever comes, just don’t stop”

One of simplest advice one can get - and actionable!

A trip around world by Mr. Knight gives a broader perspective and empathy IMO. A quote:

“If even Michelangelo didn’t like his work, I thought, what hope is there for the rest of us?”

In the context of how miserable Michelangelo was during his painting of Sistine Chapel - which he painted over years and is one of most visited places in world.

One of the greatest & heartbreaking stories of early Nike days is of “Pre”: Steve Prefontaine!

The world lost Pre way too early, at the age of 24! He famously said once

“Somebody may beat me—but they’re going to have to bleed to do it.” 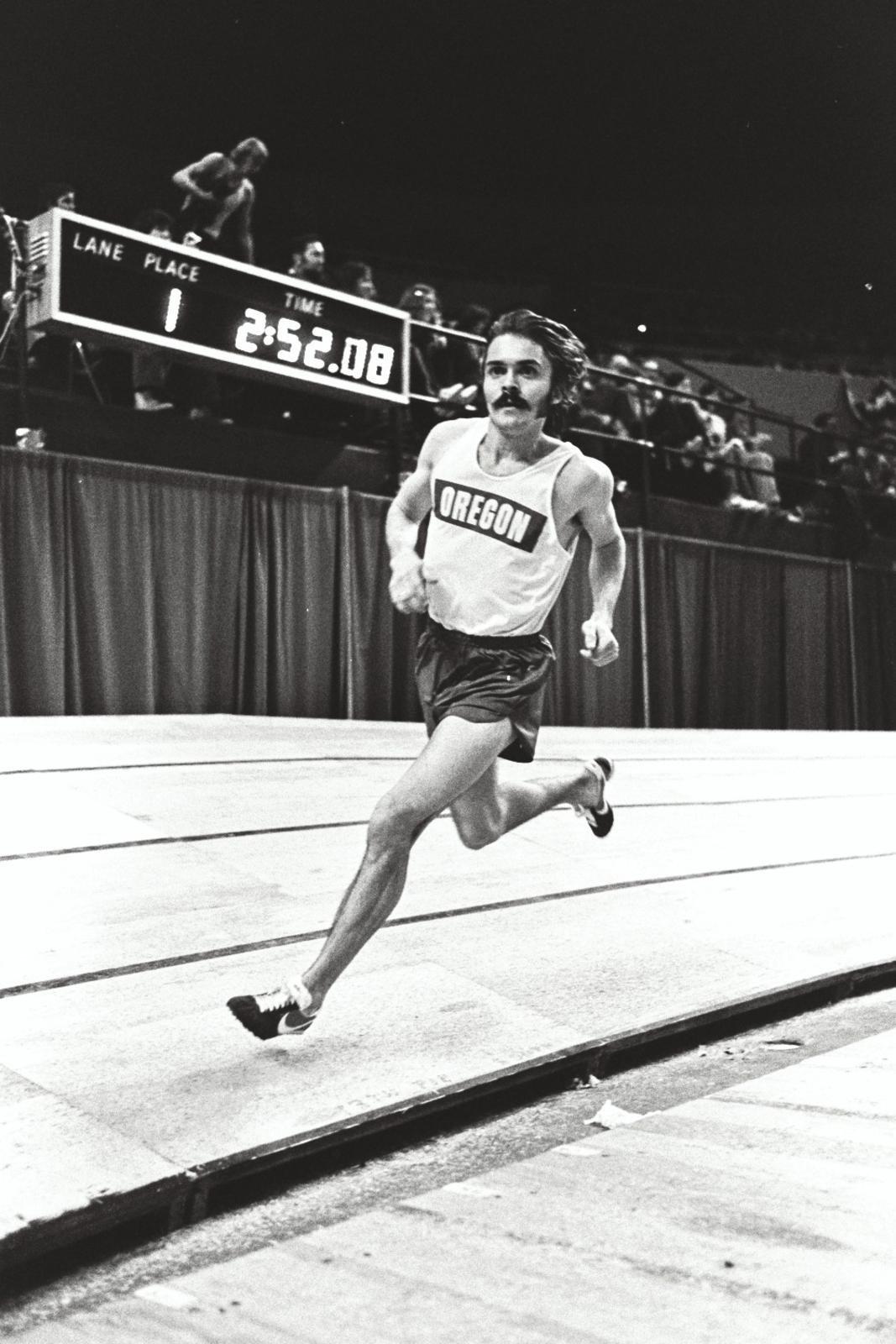 A lot of early days of anyone who runs a company are like this:

“On general accounting principles, a pair shipped was a pair sold, so the daily pair count determined my mood, my digestion, my blood pressure, because it largely determined the fate of Blue Ribbon”

But a few resourceful people - even without expertise but just the sheer mindset of learning and trying to make it possible! (Blue Ribbon was Nike’s original name) 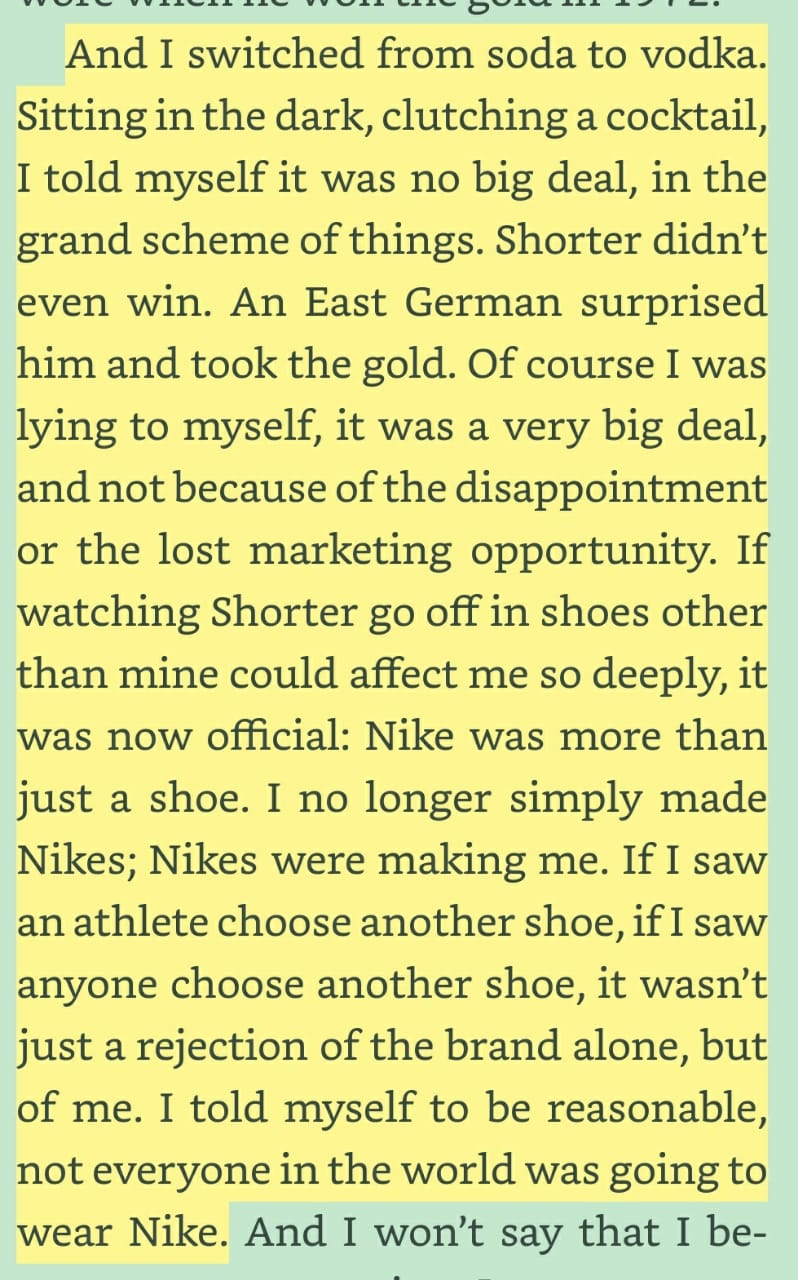 Many initial years of Blue Ribbon were of high growth but managing a tight balance of finance, operations, and other challenges - including not so helpful banks, competition, and customs!

“But I had no sense of victory. “It can all disappear tomorrow,” I whispered.”

When Nissho helped Nike to overcome the tantrums of the bank and continue to run business, even after getting to know about secret factory set up without NIssho’s knowledge using their money, Ito from Nissho:

“There are worse things,” he said, “than ambition.”

An early-stage company has many “obsessives” - a healthy obsession can produce great results!

“Some inside Nike worried about Werschkul’s seriousness, fearing it bordered on obsession. Fine by me, I thought. Obsessives were the only ones for the job.”

When Obsessed with creating something - you don’t make the creation, it is the creation that makes and defines you! 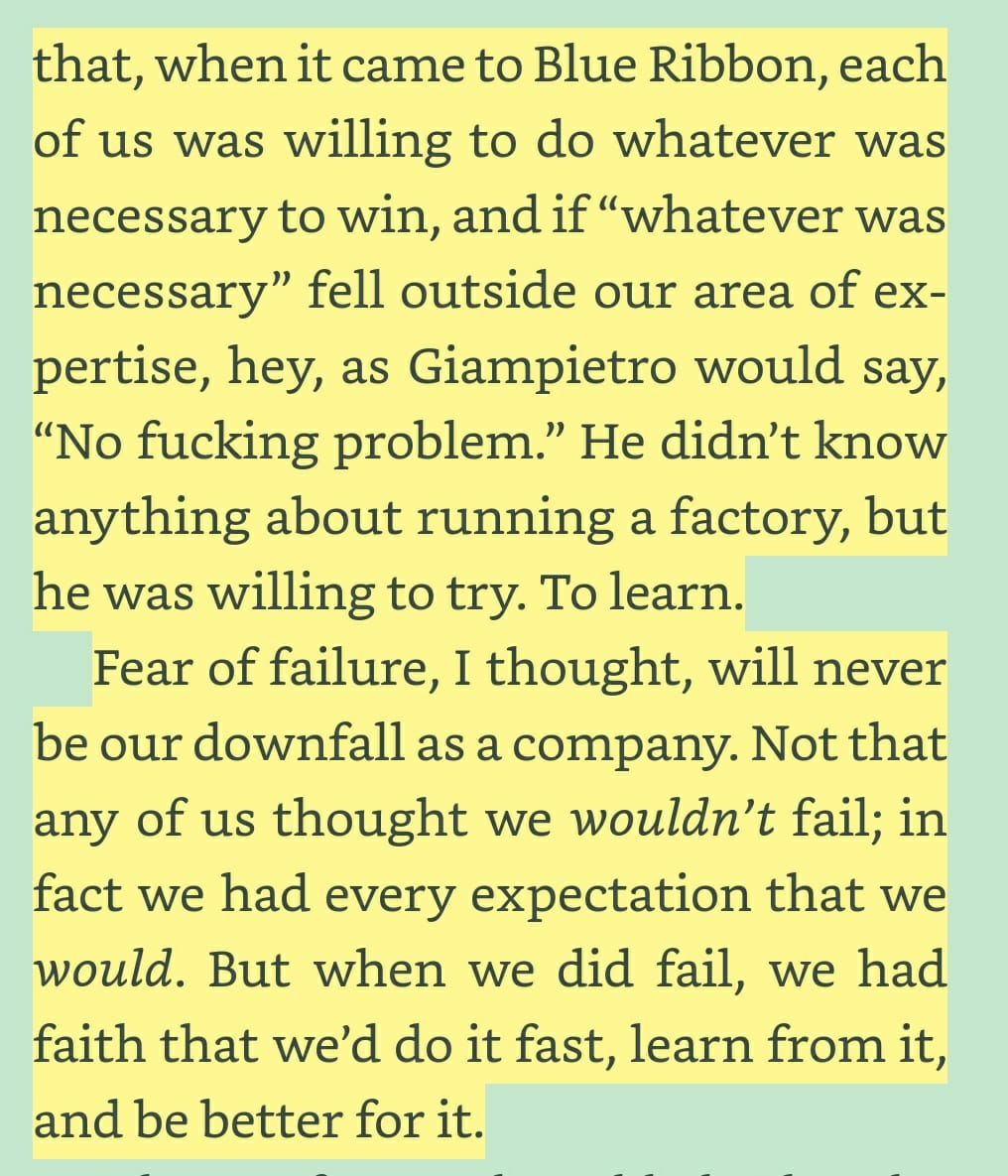 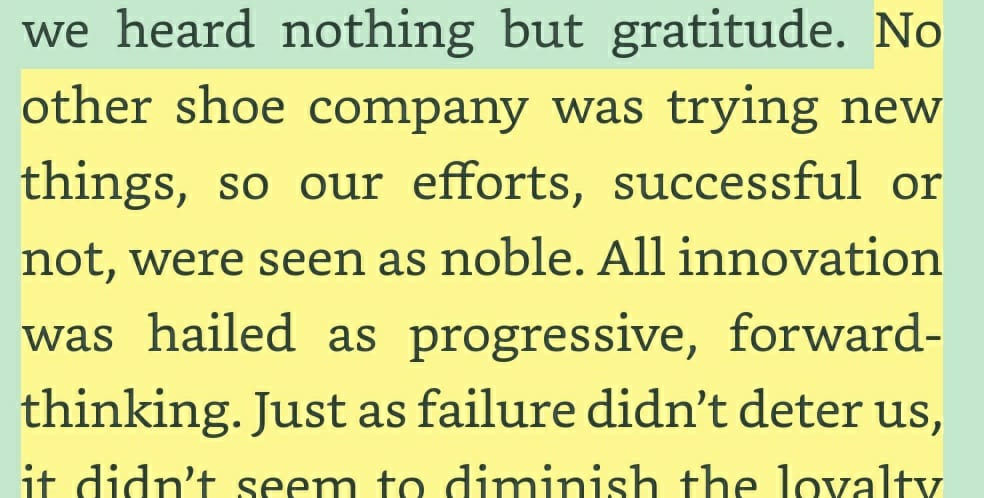 Bowerman’s designs and innovations were crucial to much of Nike’s success. Many things in business/life, we can’t see at the moment have a significant role later.

“I wonder if he could conceive in that moment all that he’d done. All that would follow. I know I couldn’t”

In end, Mr. Knight was a people’s man!

“But taking a chance on people—he’s right. You could argue that’s what it’s all been about.”

“To study the self is to forget the self. Mi casa, su casa. Oneness—in some way, shape, or form, it’s what every person I’ve ever met has been seeking.”